Erbium-ytterbium-doped laser gain media are laser gain media which are doped with both erbium (Er) and ytterbium (Yb) – more precisely, they contain the corresponding trivalent ions Er3+ and Yb3+. They are used for fiber lasers and fiber amplifiers, and sometimes in diode-pumped bulk lasers, where the emission or amplification from erbium is required (usually in the 1.5-μm spectral region), and particularly where efficient pump absorption in a short length of material is needed.

Energy Transfer from Ytterbium to Erbium 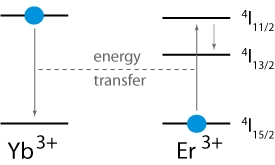 Basically always, erbium-ytterbium-doped gain media are pumped with wavelengths around the 975-nm absorption peak of Yb3+ ions. That leads to the excitation of the ytterbium ions. Thereafter, the excitation energy may be transferred to nearby erbium ions – see the article on energy transfer and Fig. 1. After a successful energy transfer, one first has an Er3+ ion in the 4I11/2 state (more precisely, a Stark level manifold), which has a similar excitation energy as the Yb3+ ions. From that state, the ions normally undergo a rapid non-radiative transition to the state 4I13/2, which is often used as the upper laser level. Such non-radiative transitions occur based on multi-phonon emission, provided that the phonon energy of the material is high enough (which is the case for silica fibers, for example).

It is possible that energy is transferred back from erbium ions in 4I11/2 to ytterbium ions. That would be quite unwanted, particularly because energy losses by spontaneous emission are about an order of magnitude faster in ytterbium, comparing with the 4I13/2 level of erbium. However, such a back-transfer may be largely suppressed if the mentioned non-radiative decay to 4I13/2 is very fast. From there, a back-transfer is no longer possible, since the required energy is lacking.

For obtaining the best efficiency of a laser or amplifier, one needs to optimize the doping concentrations of both types of ions. For too low doping, the energy transfer may not occur at a sufficiently high rate, and excitation energy is lost by spontaneous emission of Yb3+. Also, the pump absorption (see below) may then not be strong enough. On the other hand, too high doping concentrations can lead to clustering, which can cause severe energy losses, and even without clustering to an increased tendency of additional (unwanted) energy transfer processes.

Additional dopants such as alumina can help to incorporate more active ions without clustering, and also to assist in the energy transfer. At the same time, they can change the absorption and radiation properties of the ions, which can e.g. lead to a change of the gain spectrum of an amplifier. There are also additional side effects, for example concerning radiation sensitivity.

For such reasons, a careful optimization of the overall chemical composition of the material is important. The detailed composition used is often not revealed by suppliers.

Note that the quantum defect is not larger for Er/Yb-doped media than for purely Er-doped gain media, given that about the same pump wavelength is used (not considering in-band pumping of erbium). However, the quantum efficiency can be significantly lower, since the energy transfer process may not work perfectly.

The essential advantage of using Yb codoping is that this way one can achieve a substantially improved efficiency of pump absorption in a short piece of a gain medium – for two reasons:

The ytterbium ions are sometimes called sensitizer ions, because they make the gain medium in some sense more sensitive to the applied pump radiation.

Spontaneous emission of excited Yb3+ ions constitutes an energy loss and is therefore unwanted. Another possibly quite detrimental effect is that those excited ions lead to laser gain mostly in the spectral region around 1030 nm to 1080 nm. Particularly in fiber devices, that gain can get so high that a substantial amount of power is lost through amplified spontaneous emission (ASE) and/or parasitic lasing. The power losses through ASE may be further increased by the multimode nature of the fiber core at the pump wavelength.

Such problems can be mitigated by optimization of the composition of the gain medium and the system design, including the pumping conditions and the length of fiber. In ideal cases, there is not much ytterbium excitation, because the energy is quickly transferred to erbium and cannot get back from there. That may not be possible to achieve, however, for example if a high level of erbium excitation is needed, so that many excited erbium ions cannot accept energy from the ytterbium ions.

In case of bulk laser crystals, the low pump absorption achievable with erbium alone can be a particularly severe problem. The same holds to an even larger extent when amplifier gain is needed in micro-lasers [13]. Therefore, Er/Yb doping can be quite helpful in this area. However, the availability of such laser crystals is quite limited.

In case of lasers, it is sometimes important to have a rather short active fiber, particularly in order to achieve single-frequency operation. For a longer laser resonator, the free spectral range – the mode spacing in frequency space – gets rather small, and it is more difficult to suppress mode hopping. For example, distributed-feedback lasers (DFB lasers) based on purely erbium-doped fiber exhibit very inefficient pump absorption, while with Er/Yb doping a substantially better power conversion efficiency is possible.

For fiber amplifiers, it can also be beneficial to improve pump absorption, particularly if cladding pumping of double-clad fibers is applied, where the limited core/cladding overlap tentatively leads to weak pump absorption. For the amplification of short light pulses with high peak power, it is important to keep the amplifier fiber short in order to limit nonlinear effects. For core-pumped amplifiers, several decibels of amplifier gain per centimeter length can be achieved.

Modeling of Lasers and Amplifiers With Er/Yb-doped Gain Media

The relevant physical processes in Er/Yb-doped crystals and glasses – pump absorption, energy transfer, spontaneous and stimulated emission etc. – can be quantitatively investigated with mathematical models, usually of numerical type. While the complexity of such models is only moderately increased by the presence of two different types of ions and the energy transfers, it becomes substantially more challenging to acquire a complete set of spectroscopic data:

A complete spectroscopic characterization requires a quite sophisticated set of measurements and calculations; that is often not done. In particular, commercial suppliers usually do not offer such data, also because sales volumes for such specialty fibers are relatively small. In effect, it is usually difficult to estimate the achievable performance numbers before ordering the parts. This can be considered as a severe practical disadvantage of erbium/ytterbium-doped laser gain media..(Article from https://www.rp-photonics.com/erbium_ytterbium_doped_laser_gain_media.html)