Ytterbium (Yb) is a chemical element belonging to the group of rare earth metals. In laser technology, it has acquired a prominent role in the form of the trivalent ion Yb3+, which is used as a laser-active dopant in a variety of host materials, including crystals, glasses and ceramics, also often in active optical fibers. It is often used in various types of high-power lasers and for wavelength-tunable solid-state lasers.

Ytterbium-doped laser crystals and glasses have a number of interesting properties, which differ from those of, e.g., neodymium-doped laser gain media: 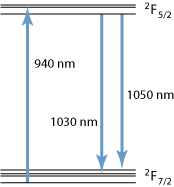 The small quantum defect also has a usually unwanted consequence: the significant quasi-three-level behavior, particularly at short wavelengths. This requires such lasers to be operated with relatively high pump intensities and makes it more difficult to fully realize the potential for high power efficiency. Another difficulty arises for the resonator designs of end-pumped ytterbium lasers: a resonator mirror for injecting the pump light must have a high reflectance at the laser wavelength and a high transmittance at the only slightly shorter pump wavelength. Dichroic mirrors with such properties for closely lying wavelengths are difficult to make.

Figure 2 shows the ytterbium transition cross sections of a germanosilicate glass. Efficient pump absorption is possible around a wavelength of 910 nm or near 975 nm. In the latter case, the pump linewidth must be small, and only ≈ 50% excitation level can be achieved due to stimulated emission, but the absorption length and the quantum defect are smaller than for 910-nm pumping.

Strong three-level behavior occurs for lasing around 1030 nm, whereas nearly four-level behavior is observed beyond 1080 nm, where there is very little reabsorption. For ytterbium-doped crystals (e.g. Yb3+:YAG), there is often a choice between different lasing transitions, where those with shorter wavelengths exhibit more pronounced three-level characteristics. 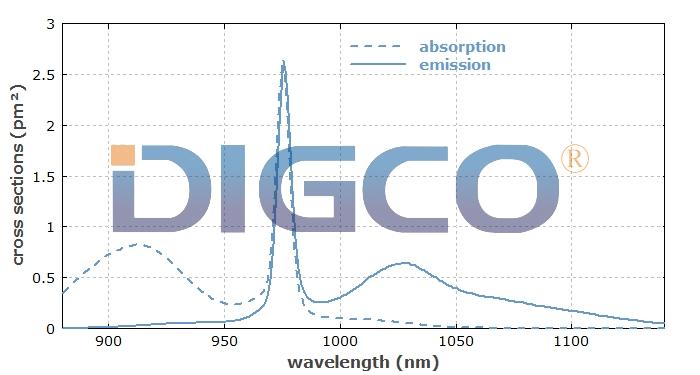 Figure 3 shows the ytterbium transition cross sections of Yb3+:YAG. In this crystalline material, the absorption and emission peaks are less broad than in a glass. The dominant emission is around 1030 nm, but the weaker 1050-nm peak can also be utilized for laser operation.

There is a very wide range of different ytterbium-doped gain media:

Some of these media are also used as ceramic laser gain media.

In most cases, the ytterbium dopant ions replace other ions (often yttrium) of the host medium, which have a similar size. For a good match of atomic size and weight, a high thermal conductivity can be maintained even at high doping levels.

Various Yb-doped gain media have been used in mode-locked lasers (see below) for the generation of femtosecond pulses; the by far highest average output powers of first 80 W at later even well over 200 W have been obtained with passively mode-locked thin-disk Yb:YAG lasers [13, 15, 25].

For passive mode locking, problems can arise in the form of Q-switching instabilities. This tendency is a consequence of the relatively small laser cross sections of ytterbium-doped media. Therefore, some of the broadband ytterbium-doped gain media are not very suitable for passively mode-locked lasers, particularly at high power levels, but can still be very useful in regenerative amplifiers. Relatively large cross sections are found for tungstate crystals.

Some ytterbium-doped crystals have a fairly broad amplification bandwidth, but the emission curve is not very smooth; it exhibits several maxima. In such cases, wide wavelength tunability may still be achieved, but the realization of very short pulses with mode locking is difficult.

Due to the very simple level structure of the Yb3+ ion, it was widely believed that quenching effects are basically impossible. However, it has been discovered [7] that even strong quenching effects can occur in ytterbium-doped fibers. In that case, some fraction of the ytterbium ions – sometimes a few percent, sometimes more than 50% – then has an extremely shortened upper-state lifetime, whereas the other Yb ions are basically unaffected. The fraction of quenched ions depends strongly on the fabrication conditions. Even a small fraction is sufficient for strongly reducing the laser or amplifier performance, particularly for laser or pump wavelengths with strong absorption cross sections.

Another detrimental effect is photodarkening in Yb-doped fibers, a gradual degradation of fibers observed particularly in cases where a high ytterbium excitation density is required.

So far, only a limited amount of data on such effects is available, and the issues are not yet very well understood.

Ytterbium doping is also often used together with erbium doping. Typically, ytterbium ions absorb the pump radiation and transfer the excitation energy to erbium ions. Even though the erbium ions could directly absorb radiation e.g. at 980 nm, ytterbium codoping can be useful because of the higher ytterbium absorption cross sections and the higher possible ytterbium doping density in typical laser glasses, so that a much shorter pump absorption length and a higher gain can be achieved. Ytterbium codoping is also sometimes used for praseodymium-doped upconversion fiber lasers.(Article from https://www.rp-photonics.com/ytterbium_doped_laser_gain_media.html)