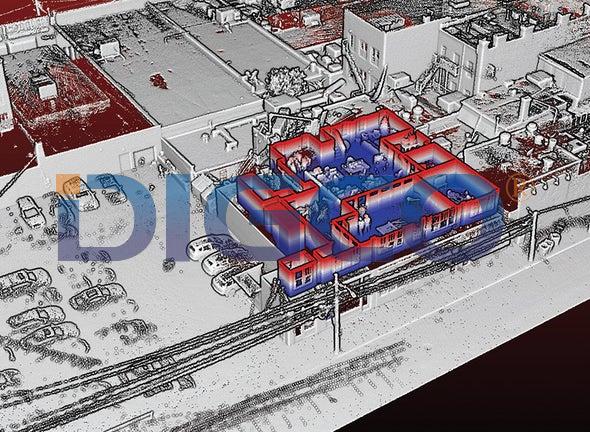 A 3-D map of the interior of these commercial offices can be modeled in less than half an hour, makers of a new device say. Credit: COURTESY OF KAARTA

Major automakers—along with upstarts such as Tesla and Uber—are racing to put self-driving cars on the road, leading to advances in enabling technologies such as laser range finders known as lidars. A lidar works like a hyperactive laser measure, scattering laser light in multiple directions to gather hundreds of thousands of measurements per second and build up a “point cloud” of spatial information. A computer processes these data to form a coherent picture of a vehicle's surroundings.

Now a Pittsburgh-based start-up called Kaarta has integrated a lidar—more affordable and speedier these days, thanks to accelerated development by suppliers serving the auto industry—with a motion sensor, processor and seven-inch touch screen into a handheld device. Called the Contour, the device enables architects, builders and others to generate 3-D computer models of their surroundings on the fly as they walk through them, the company says. A camera on the device captures color data and maps them onto point clouds to render models in realistic hues. When loaded into standard computer-aided design (CAD) software, the models can then form the basis of building renovation plans or other projects.

The Contour moves well beyond the measuring-tape-and-clipboard approach most builders still use to get data for CAD models, Kaarta CEO Kevin Dowling says, and that will save time. The company expects to start shipping devices to customers by the second half of 2017.

This article was originally published with the title "Maps on the Move" in Scientific American 316, 5, 15 (By Michael Belfiore May 2017)