Lidar (light detection and ranging) is becoming a key technology in autonomous driving, process automation, and defense and security applications. In comparison to passive optical technologies where the reflection of ambient light is used to create the picture, lidar emits optical pulses. The reflection of those pulses off objects is used to paint a detailed picture of the local environment to help with orientation, detect obstacles, and measure distances. There are multiple types of sources, sensors, scanners, modulation, and detection algorithms that can be employed. Depending on the combination used, lidar systems are capable of accurately measuring from a few millimeters to tens of kilometers; in one, two or three dimensions.

Lidar systems actively emit laser pulses at a very specific wavelength, concentrated cone angle, and modulation and actively filter out the ambient light to obtain consistent conditions for the returning light day or night. Two methods are used for determining distances to objects in the local environment:  time of flight and phase shift.  In the time of flight method, a very accurate clock measures the time it takes for the emitted laser pulse to travel to an object, be reflected off an object and return to be detected by the receiver. Distance is then the time of flight times the speed of light. Due to the finite cone angle of the laser beam and field of regard of the receiver, multiple returns are typically obtained, corresponding to objects at different distances.

The strength of each return depends distance to the target and on the target’s cross section and reflectivity. Sophisticated systems can utilize both timing and strength information to not only locate obstacles, but also provide information on target identification to help distinguish between asphalt and lines on the highway; street signs vs trees or utility poles; or natural vs man-made objects.

A single lidar sensor provides depth information along the line of sight in its field of regard. To create a multidimensional map of the local environment, lidar systems must effectively scan in the other two dimensions. This can be accomplished by physically scanning in angle or by using flash lidar. Flash lidar systems are like 2D digital cameras but where each pixel acts like the receiver sensor discussed above.   Rather than a tightly focused beam, a large area pulsed laser like a VCSEL (vertical cavity surface emitting laser) or homogenized laser illuminator is used as the transmitter. 3D lidar is more computationally intensive than 1D, but a 3D scene can be generated at video rates.

In autonomous vehicle applications (e.g., cars or drones), lidar is often combined with cameras and/or traditional radars to provide a redundant view of the local environment to keep the vehicle on course and avoid obstacles and improve navigation in dark environments since lidar is insensitive to ambient light conditions.

Some 3D lidar performs well in poor weather conditions, depending on laser wavelength. Many  commercially available lidar systems operate in the near infrared (NIR).  Better performance is obtained at longer wavelengths because they are scattered less by fog and rain. New lidar technologies use short wave infrared (SWIR) light at wavelengths operating in a band of high atmospheric transmission around

1.5um, but these systems are more costly than NIR-based systems due to their lower production volumes.  SWIR lidar is also safer for human vision than NIR lidar, which allows SWIR systems to operate safely at higher power and detect more distant objects.

By far the most prevalent use of laser ranging technology in defense applications is for targeting and fire control. These systems are used to rapidly determine range to target at high accuracy (tenths of a meter at kilometer ranges) and are used for fire control for artillery, snipers, and more recently even traditional infantry. The safety of our forces is increased by being able to accurately engage the enemy at long standoff distances.  New weapons are being developed to facilitate longer range, and they are being paired with new fire control systems that combine laser range with humidity, air pressure, and wind information to automatically correct the aim point for bullet drop and drift to deliver ordnance on target on the first shot without having to zero-in with multiple rounds. 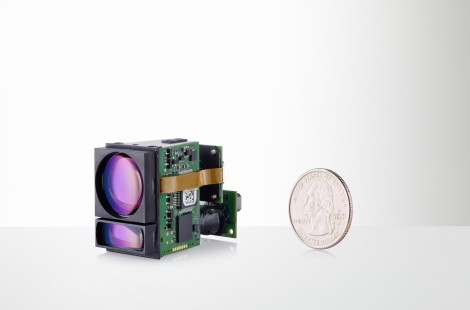 It weighs only 33g and is 50mm X 22mm X 34mm in size but can range to a 30% man-sized target at 2000m in 10km visibility and over 3000m to a NATO target. The DLEM 20 and the larger longer range DLEM variants can range from single shot to 25Hz, are 100% eye safe when ranging, and can detect multiple targets (signal strength values can be returned with each return).  New products are being developed to further reduce the size and weight in the DLEM product line and a second DLEM engineering and production capability is being opened in Jupiter, Florida. The new engineering capability will facilitate customization, service, and soon be capable of production of both standard and custom LRF assemblies for North American customers.

Costs to drop as Lidar is adopted

Lidar systems are increasingly being used for navigation and collision avoidance for autonomous automobiles and drones as well as in defense applications. Lidar systems actively emit optical pulses and are more immune to ambient lighting and weather than traditional imaging systems. The cost of these systems is currently high, but we predict costs will drop significantly as they are adopted more widely in new applications.